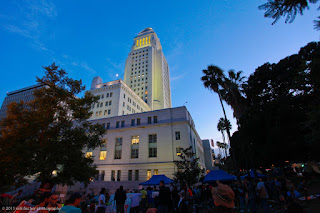 This is a Code of Ethics for journalists who work as live streamers at events such as protests.  It originated in the Occupy movement.  It was written by @Cross_X-Bones, a highly experienced streamer journalist from Occupy Los Angeles.  He got input from @PMBeers, who has covered a tremendous number of Occupy events, including overnight camping occupations on the streets of Los Angeles.  Also contributing was @Rebelutionary_Z of Chicago, who has streamed protests in Chicago and nationwide, including 2012 NATO in Chicago.  The document itself can be found below and also at https://docs.google.com/document/d/1nwX_bLxV1hZU93YGtwx-6ijU1B7Ojq36ZVwZHBuPvn4/edit

As you read the Code of Ethics, please notice the care and detail that have gone into it.  Live streamers are a crucial element of today's Freedom of Assembly.  The live streamers provide a witnessing element so those not present can participate. They also give a protective element in providing evidence of what really happened.  Live streamer footage has been used in numerous court cases nationwide as evidence for the defendants.  Live streamers are truly independent media makers.

Live streamer footage provided much evidence for the U.S. leg of the  OSCE ODIHR Report on Monitoring of Freedom of Peaceful Assembly in Selected OSCE Participating States May 2011- June 2012.  This is a study with which I assisted.   In the U.S., the study covered the 2012 NATO Protest in Chicago, the 2012 G8 Protest near Camp David in Maryland, Occupy Wall Street New York City, Occupy Los Angeles, Occupy Oakland, and Occupy Chicago.  In each location, ample video footage was provided by live streamers, making this perhaps the first study of human rights in protest that was backed up by audio and video live on-site documentation.

The importance of live streamers to human rights in public assembly cannot be overstated.  Live streamers are crucial to our democracy and freedoms.  These people have voluntarily undertaken this important role in our society.  They do so at their own expense and with the help of donations from viewers.  Below are the Guidelines they have set out for themselves.  You will see they expect a lot of themselves and their fellow live streamers.

Principle of Respect
Respect allows a Streamer continued access to communities, organizations, and individuals.
Streamers should:
Principle of Integrity
Integrity allows a Streamer to operate without destroying credibility.
Streamers should:
Principle of Accountability
Accountability assures participants, viewers, and sources that a Streamer holds true to all principles.
Streamers should:
• Provide all raw live footage in an open-source manner.
• Give explanations and invite participation on your stream and through other means about journalistic conduct.
• Encourage and listen to public grievances against the news. Try to improve when possible.
• Admit mistakes in a timely, honest, and open manner.
• Reveal any unethical institutional journalistic practices, but also try to hold to the highest standards in all journalistic actions. Do so with an eye toward restorative justice.
Principle of Humility
Humility provides a Streamer a continued place in the emerging social media news community.
Streamers should:
• Acknowledge the contributions of sources, participants, viewers, and other journalists.
• Balance the need for competition with the need for cooperation.
• Not overstate accomplishments.
• Help others learn about the streaming medium.