Actor Jussie Smollett recently reported being attacked on a Chicago street near his apartment.  There has been some confusion among people as to the location and situation.  As a Chicagoan who has been on those streets thousands of times, I shall explain with pictures taken off Google maps.

The Loews Hotel Chicago also has apartments, called the North Water Apartments.  Apartment residents can enter from the hotel lobby, the apartment entrance around the side, or the lower level parking garage that goes out onto the 300 block of East Lower North Water Street.

East Lower North Water Street. That street name may sound confusing.  When the hotel was built, it was designed with an upper and lower street level, like the nearby buildings.  The lower level is not actually underground, but appears to be because it has a roof over it.  It is at normal street level.  This lower level is used for an entrance to a parking lot, for delivery vehicles, etc.   The upper level is at the created upper street level and is the "fancy" level. This two-level development scheme started long ago with the Tribune Tower on North Michigan Avenue, and then was extended going East toward Lake Michigan with the University of Chicago Gleacher Center and NBC Tower.  When the Loews Hotel and North Water Apartments were built east of Columbus Drive, those were also built with two street levels.  The North Water Apartments are built over a street created for this purpose, which is called New Street, possibly because they were making a new street.

The upper street levels are fancy, open to sunlight, decorated with plants and flowers, but also open to extreme winds and cold in the winter and blistering hot in the summer.  The lower street level is dark, lit by street lights, and can be choked with car exhaust.  The lower street levels provide some protection from the strong winds and cold that are on the upper levels. How strong are the winds?  A few times a year, local news stations feature videos of people being blown over or nearly swept away by the winds.  Chicago is nicknamed "the windy city," an apt name.

If one is walking outside, to get from the upper levels down to the lower or street levels requires walking down a steep staircase.  I am not aware of any other way of going from the upper to lower levels, such as a ramp or elevator.  In the rain and snow, these staircases are slippery.

The North Water Apartments are designed to attract corporate rentals for their workers and guests who will be in Chicago for stays too long for a hotel room and too short to justify renting a regular apartment or buying a house.  The building works with a furniture rental company, since many renters will be short term.  The North Water Apartments range from studios at over $2000 per month plus amenities fees plus furniture rental, to 2 and 3 bedroom apartments starting at over $4000 per month.  These apartments are considered good as corporate rentals; for wealthier law, medical, and MBA students from the nearby schools; for interns working in Chicago for a few months; and for those just arriving for a new job.

The North Water Apartments have spectacular views. Depending on which way the apartment faces, the views may be of Lake Michigan, the Chicago River, Navy Pier, the downtown skyline, or a city view.  The building has a pool, an outdoor space with shared barbecue grills, and a nook with a media center and digital fireplace.

When I first attended college, the school was a block from where the North Water Apartments are now.  Back then, our film school was in a building rented on one side to film production companies.  On the other side of the building was a water slip, an inlet of Lake Michigan, with boat slips for yachts and motorboats.  We students ate lunch at a cheap cafe down the block, which was the only eatery for many blocks around.  There were many empty lots with scrap shrubbery.  There were blocks lined with mysterious storefronts offering such things as reupholstery services, skateboards for sale, and fortune telling.  Over the years, an enormous amount of development has taken place in that area.  The building where I first learned to edit film is now home to a Target store and an assortment of upscale cafes and shops, with high end boats mooring on the south side.  There are many newer townhouses, highrises, pocket parks, restaurants, and stores.  Despite all this development and the apparently dense population now living in highrises, at night, the area has a feeling of being deserted and potentially unsafe.  In winter, winds rip through the plazas to create frigid wind chill temperatures.  In the summer, all that concrete turns the area into a baking oven.  By day, the area is flooded with tourists and suburbanites and sometimes, notorious teen mobs who ride the subway train to come wreak havoc.  It's an exciting area, but it is not cozy or homey or safe-feeling.  The area is upscale, but seems to draw those seeking to rob or assault or pickpocket or shoplift.  It's the sort of area where one could live a luxurious lifestyle, while constantly on guard for crime.  It's the kind of place where you don't keep a wallet in your back pocket and you wear your purse cross-body.

Let's look at some photos of the area.  All of these have been carefully selected off street view of Google maps.  They are used here in fair use for purposes of analysis.

When viewing the pictures, notice how easy it would be to stand on the upper level and watch someone walking on the lower level -- and then walk quickly down the stairs just in time to mug that person. Also notice the many nooks and crannies where a person could hide and wait to pounce out. 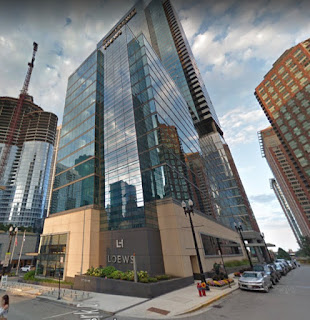 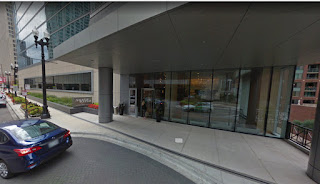 This is the street level entrance to the North Water Apartments. 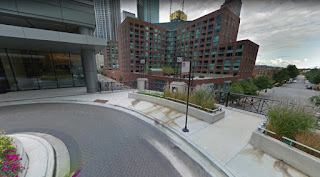 This is the entrance to the North Water Apartments, with the circle drive in front of the entry.  In the distance, we can see one of the buildings that would be passed in going to the Subway shop. 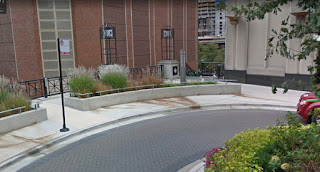 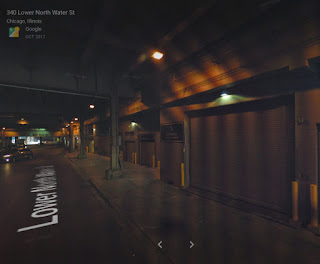 This is what it looks like on East Lower North Water Street.  One can enter or exit the hotel and apartments, walk down this street, and come out at regular street level of the surrounding streets.  That makes it a shortcut.  The roof above also protects it somewhat from the cold, rain, and snow. 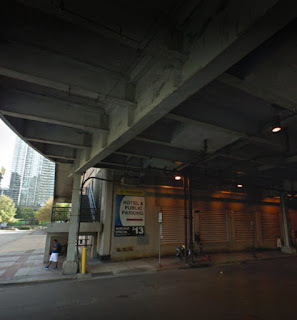 This is the staircase at the end of East Lower North Water Street.  See the tall staircase one would have to climb to get from the upper level to the lower level.  Also note how standing on the staircase would give one a good view of the streets below.  Also note the hiding spaces provided by the staircase structure. 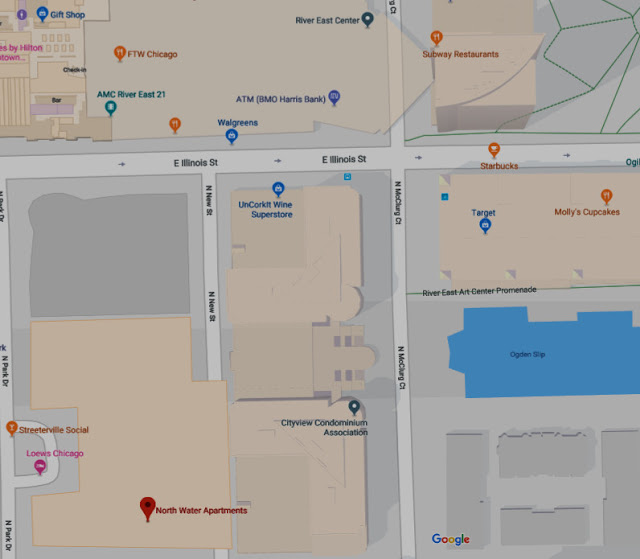 This map shows the route from the North Water Apartments, in the lower left corner, to the Subway restaurant in the upper right corner.  This is about a 5 minute walk, possibly 7 minutes if stopped by a traffic light. 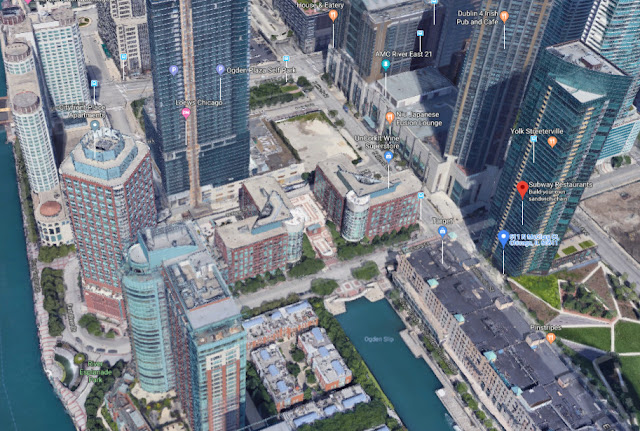 This is a sky view looking from the East.  The pink dot is marked Loews Chicago. The Subway restaurant is on the ground floor of the tall darker bluish building to the right. 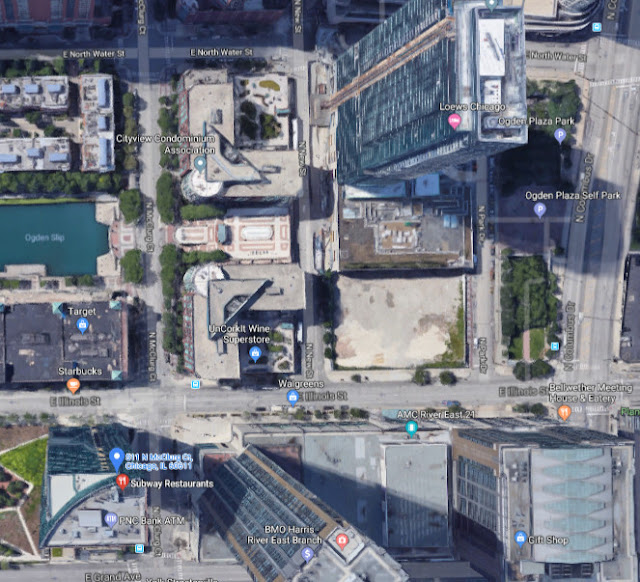 This is the reverse route -- looking from north to south.  The Subway is on the ground floor in the building on the lower left corner of the picture.  Walk north to the first street, which is Illinois Street.  Make a right turn and walk a short block to New Street.  At New Street, turn left and walk along New Street.  It is a long block along New Street up to North Water Street.  This is near the top center of this aerial view.  This is where the attack took place, from reports I have heard. 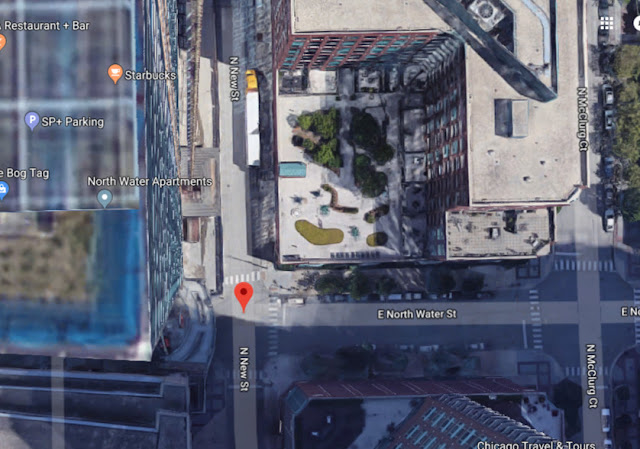 This is a sky view of the corner of New Street and East North Water, near where the attack happened.  At this corner is the street level entrance to the lower level of North Water Street. 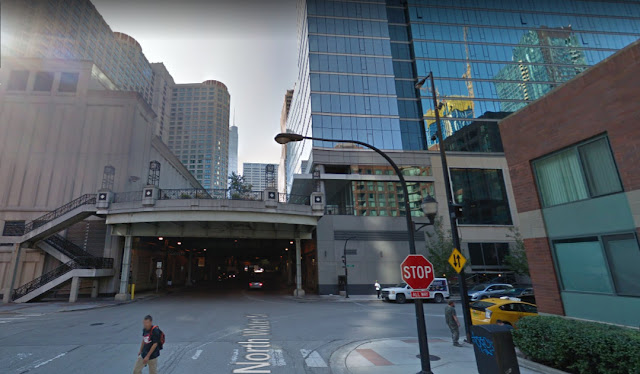 This is the street level at the intersection of New Street and East Lower and East Upper North Water Streets.  If one enters the lower street level, there is an entry to the hotel and apartments, as well as entrances to parking.  If one climbs the staircase seen to the left, this goes to the circle drive seen in earlier pictures and directly to the entrance of the North Water Apartments.  With these being the choices, it is obvious why one might choose the lower level, even though it is dark and tunnel-like.  From reports I have heard, the attack took place near this intersection.  It sounds, from timing on surveillance videos, that the attack was one minute long and took place out of view of the cameras that have been located thus far.