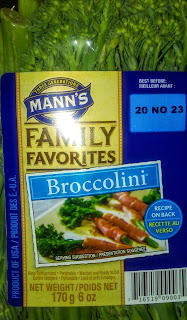 A great use of trademark is to create a new product out of an existing one.  Mann Packing Company has done just that by creating the name, "Broccolini," and registering a trademark on it.

Broccolini is actually a Japanese vegetable called, "Asparation."  Mann Packing Company got a packing and distribution contract with the Japanese company, but needed a better name than "Asparation," which sounds more like a self-help group.  Mann's came up with the name, Broccolini, and to protect it, registered a trademark on that name.  The trademark application was filed in 1998 and the trademark certificate was granted in 2000.  It is a word mark on the word, "Broccolini," and it is for the goods of  Fresh Vegetables.

You might be wondering if a patent can be registered on a vegetable.  A patent is protection for an invention.  According to this great little article, https://www.nolo.com/legal-encyclopedia/plant-patents.html, a vegetable can only be patented if it is created by breeding or grafting.  Otherwise, plants might be protected in the U.S. by the Plant Variety Protection Act.

If you enjoy broccolini, you might wonder what is the difference between broccolini, broccoli rabe, and Chinese broccoli.   According to Eater.com, Chinese broccoli is a leafy vegetable without flowers.  It is served often in Thai restaurants in pad see ew, a dish with thick noodles, Chinese broccoli, bean sprouts, a protein, and a savory dark sauce.  Broccoli rabe, which is often called rapini, looks like broccoli, in that it has flowers, but it also has many leaves.  Rapini is one of my favorite vegetables because it sautes up nicely. I use rapini in Asian dishes.  Broccolini is a hybrid between broccoli and Chinese broccoli that was invented in 1993.  Broccolini has tender stems that can be sliced and sauteed, stir-fried, or eaten raw in a salad.  Broccolini is one of most favorite vegetables, for its beauty as well as its versatility.

Trademark can be a rather magical thing.  With Broccolini, trademark has been used by Mann's to create a highly marketable product, as well as to create a product sold exclusively by Mann Packing Company.  Depending on the contract with the Japanese inventor of Asparation, other U.S. companies might be able to sell Asparation, but none of them would be able to use the Broccolini name, unless they license use of the name from Mann's.

I think of Mann's as an excellent, innovative company that has done great service in creating and packaging highly desirable fresh vegetables.  Mann's sells bags of fresh vegetable mixes where the vegetables have already been cut up into their usable parts, washed, and sorted.  For example, Mann's sells such things as bags filled with broccoli and cauliflower florets.  The company also sells bags of vegetables ready to stir fry, such as a mix of broccoli, carrots, and pea pods.

With all these fantastic, easy-to-use fresh vegetable products, everyone should be eating and enjoying plenty of nutritious vegetables.

Other companies have created trademarks for vegetables.  For example, Jolly Green Giant has a trademark on the word "Niblets" for canned corn.  Mann's itself has 50 live trademarks registered on various vegetable product.  You can see these listed below.