Oakland Warehouse fire: What Caused It

Oakland Warehouse Fire: What Caused It
by Susan Basko, esq.

December 3, 2016.  Last night, there was a devastating fire in the Fruitvale area of Oakland, California, U.S.A., in a warehouse that had been turned into an artist live/work space.  The artists called the space Ghost Ship.  Some called it Satya Yuga, or in Hindi,  सत्य युग, which translates into English  as "truth era."  So far, reports are that 9 people died in the fire and many more are dead in the rubble.

The Oakland fire department has stated that the building was a maze with many alcoves built in by the artists. The building owner was recently reported or cited for building code violations. To call the Ghost Ship a "fire trap" would be putting it mildly, as seen in the photos posted below.

The photos below show several themes: Misuse of fire, fire hazards, an enormous amount of clutter, dangerous fire trap interior building divisions into small cubbyhole spaces, many lanterns and candles, no clear or easy exits.  This building was the definition of "fire trap."

If you would like to read a basic primer on Venue Safety, please see:
http://suebasko.blogspot.com/2014/02/basic-venue-safety-for-festivals.html

If you would like to donate to a fund to help the fire victims:
https://www.youcaring.com/firevictimsofoaklandfiredec232016-706684

All photos below are inside or in the outside yard at the Ghost Ship/ Satya Yuga Artist Cooperative Live / Work Space in  Oakland, California, where a terrible fire occurred on December 2, 2016, tragically killing many young adults.  All photos are used Copyright Fair Use, owner not known, dates not known, all photos obviously taken at some time before the fire on December 2, 2016, possibly weeks, months, or even years before the fire. Click on any photo to enlarge. 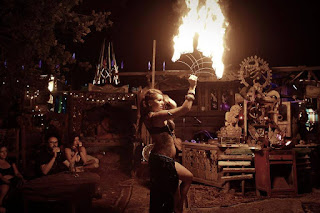 This undated photo appears to be the outside yard of the Oakland Ghost Ship. In it, a fire dancer uses a very high flame while standing on or near an old carpet, amid clutter and overhanging tree branches.  This is, obviously, extremely dangerous. 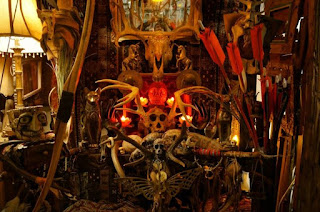 The photo above shows what appear to be lit candles placed amid
an altar of antlers, skulls, arrows, and other clutter. 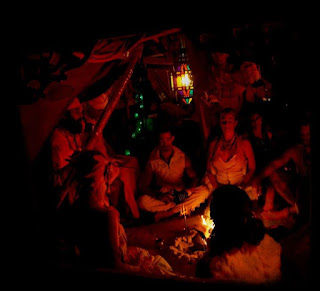 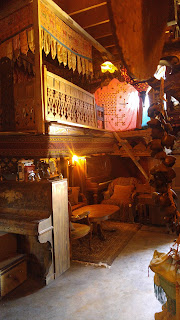 This photo above shows an upper and lower deck built into the cluttered space. 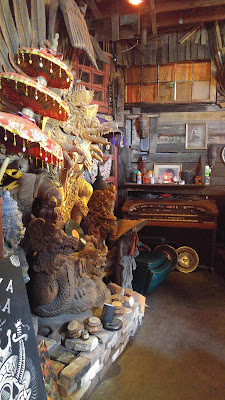 Photo above shows unlit candles on an altar. 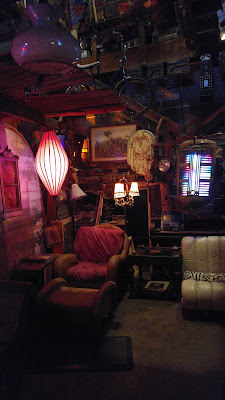 Photo above shows a hodgepodge of lanterns, a jukebox, clocks, chairs, wood,
a bicycle hanging from the rafters.  This is fascinating to look at, but is quite a fire trap. 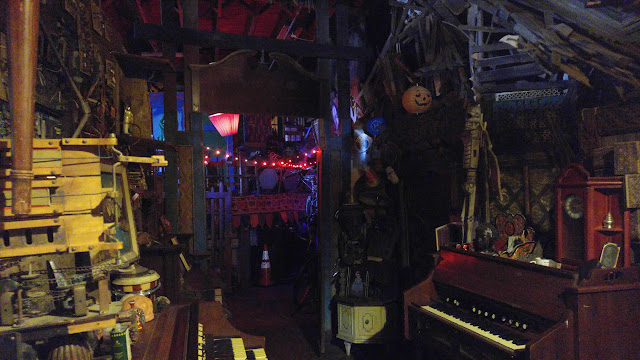 Decaying wood, what looks like an old sled, old music organs, and an array of clutter
look like a fire could easily start and spread. 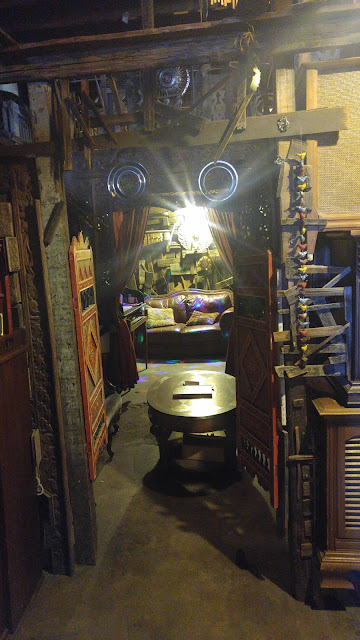 Imagine trying to find your way out to an exit during a fire.