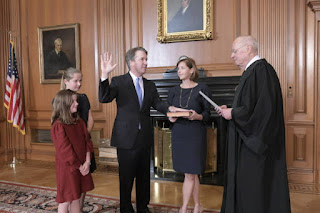 Brett Kavanaugh is now Justice Kavanaugh of the U.S. Supreme Court.  The photo above shows Justice Kavanaugh being sworn in by Chief Justice Roberts in the Justices' conference room.  This is the actual room where the Justices meet and sit around a table and take a vote on the cases they have heard.  There are several conference rooms at the Supreme Court building, and they have lovely old chandeliers, as shown below.  In the Justice's conference room, the chandeliers were replaced with bright lights because one of the Chief Justices thought it would help them to see better.  Look how bright that room is! 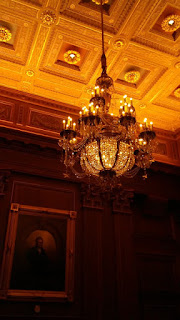 As the Junior Justice, it will be Kavanaugh's duty to answer the door to the conference room, should anyone come knocking while the justices are meeting.  The doors to the conference rooms are very tall and heavy and ornate.  There will be security and staff and workers, but not directly inside the room, which is private, since the deliberations are considered secret.  The junior justice is also in charge of taking notes during the meetings.

Another duty of the Junior Justice is to supervise the cafeteria that is on the ground floor of the Supreme Court building.  That cafeteria is open to the public and is frequented by staff from the U.S. Capitol building across the street.  When Elena Kagan was the junior justice, she earned a reputation of having healthy foods in the cafeteria.  The cafeteria had a well-stocked, fresh salad bar.  She also introduced some local foods from her region.  Since Justice Kavanaugh is from Maryland, perhaps he will introduce crab cakes and hush puppies to the cafeteria line-up.  Maryland is also known for its official dessert, Smith Island cake, a yellow cake that has many thin layers, each cemented to the next with a layer of rich chocolate filling.  We'll have to wait and see what goodies this new justice brings to the cafeteria.

The Supreme Court hears cases in an ornate old courtroom that has much of the original furniture from 1935, when the building was completed.  The Justices sit on a raised stage, behind a long desk.  Each Justice gets a special chair made to his or her measurements and specifications.   Considering they have to sit for long hours listening to case arguments, they need comfy chairs.  Sometimes a justice might appear to doze off, but you will never see this in pictures or video, because cameras are strictly forbidden in the Supreme Court courtroom.  The hearings are audio recorded and the archives of those recordings are on the Supreme Court website. 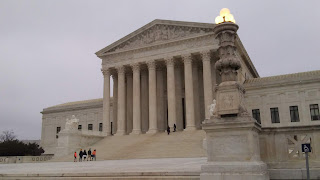 When Justice Kavanaugh comes to work each day, he does not have to walk up the tall staircase out front.  There is a side door on the ground level, and elevators that go to the courtroom level.

Above the courtroom is a gymnasium and basketball court.  It is open when the court ends for the day.  If someone were shooting hoops during court, it would sound like boom boom boom on the courtroom ceiling. Can you picture Justice Kavanaugh going up to the gym to shoot hoops with Justices Gorsuch and Kagan?  Maybe, right?  Or maybe he will join Justice Ruth Bader Ginsburg in doing callisthenics and thai chi?

Note: Susan Basko, the author of this blog, is an attorney and counselor of the U.S. Supreme Court.